A habitat assessment and general biological inventory were conducted at the Vilbig Lake marsh/wetland area (site) in Irving, Dallas County, Texas.  Figure 1 presents the area surveyed/assessed.  This report summarizes activities and presents the habitat assessment results.  It does not strive for the creation of a pristine area, but rather seeks preservation of the area that will allow humans to enjoy the benefits of a quality environment, which supports humans and human-tolerant wildlife.

To obtain a general understanding of the ecological systems present at the site, a habitat assessment was conducted from December 1997 to May 1998.  Components of the habitat assessment included listing observed flora and fauna (including threatened and endangered species) and critical area determination.  The objective was to provide a baseline of information regarding habitats at the site.

Plant and animal species encountered visually or by sign as tracks, gnawing’s (beaver), and scat were identified to species if possible, and listed according to specific groups.  Various field guides were used to facilitate identification.  Wetlands associated with the site were confirmed in forested, stream fringe, and shoreline areas.

The site lies in North Central Texas specifically, western Dallas County.  The site is totally within the Trinity River basin.  Current land use in the vicinity of the site is residential, recreational, light industrial, and undeveloped.  Average population density per square mile for Dallas County is 2, 069 people.

Topography is characterized by relatively flat land with a portion dissected by a small stream.  Land elevation is approximately 440 feet mean sea level.

Within a broad classification, the site lies within the Blackland Prairies ecological region of Texas and is close to the Cross Timbers ecological region.  Because of the two ecological regions, presence of a major tributary of the Trinity River, and the transition of moist climes of East Texas to dry West Texas, the site may support diverse habitats.

A classification of the natural communities of the site was not the main objective of this habitat assessment, but the constituents of the communities noted in the course of this assessment are listed and briefly described.

The following habitats occur o or near the site based on the results of the assessment.

Open water habitat occupies most of Vilbig Lake.  Shoreline habitat follows the boundary of Vilbig Lake.  Emergent wetlands exist adjacent to the shoreline and in the many sloughs and backwaters that are present (Figure 1).  Riparian woodlands exist along the stream on the eastern portion of the site and on the numerous peninsulas that exist.  Mixed open lands comprise the remaining habitat type.  Figure 2 presents the approximate location of each habitat type.  No other significant natural communities are present on or adjacent to the site.

The habitat assessment consisted of visual inspections of site conditions 1 to 2 days per month from December 1997 to May 1998.  Concerning vegetation, dominant species were identified [as well as major community types].  This was accomplished by walking transects through the habitat types [except for open water] and observing plants, birds, plants and other wildlife.  The shoreline was assessed for vegetation and other wildlife sign (tracks, scat, fish, and tadpoles).  A list of plants (flora) and animals (fauna) observed during the assessments is provided in Tables 1 and 2.  The flora and fauna are provided using the common name only, for simplification.

A habitat associated with the open water habitat is the vegetated shoreline.  This area virtually extends throughout the boundary/border of Vilbig Lake.  The vegetated shoreline at the site appears to be highly productive for plant material and provides shelter for birds and other animals.  Plants such as tamarisk (salt cedar), broom sedge, and false indigo were observed.  Birds such as American coot, red-winged blackbird, killdeer, common snipe, mallard, and great-tailed grackle were observed in this habitat.

Emergent wetlands account for a small percent of the area within the site but they are very important in the productivity of fish and wildlife resources.  They are also critical for the maintenance of clean water and controlling of floodwaters.

The riparian forest area exhibits 25-50 percent tree cover and comprises a majority of the eastern portion of the site.  Dominant trees include early success ional wetland species such as willow, green ash, and some cottonwood; moist area species such as cedar elm; and drier area species such as pecan, elm, walnut, and eastern red cedar.  This forest also includes hackberry, sugar maple, black cherry, and mulberry.

This riparian habitat is typical to other riparian forests in North Central Texas in that it is a higher productive habitat that provides storage to floodwaters, removes sediments and pollutants from water, provides habitat for migratory warblers and other small birds, provides a wind break, and cools the air in summer.

Small shrub habitat occupies a small percent of the area and is a transition habitat from early success ional open field or emergent wetland to the forest community.  Shrubs include young tree species less than 12 feet tall plus some hawthorn, yaupon, and deciduous holly.  Birds such as mockingbird, northern cardinal, Carolina wren, brown thrasher, and eastern towhee were identified in this habitat.

Mixed open lands include the remaining habitat with less than 25 percent trees and/or shrubs.  This includes the grassy areas and the field.  The field provides a wildlife food source and floodwater storage.  It appears to have high herbaceous vegetative productivity.  Plants such as the prairie primrose and white clover were ubiquitous.  Birds such as scissor-tailed flycatcher, eastern phoebe, and mourning dove were commonly observed.

General soils comprising the site are Siliwa-Silstid-Bastsil: deep nearly level to sloping, loamy and sandy soils; on stream terraces.  The soil unit that comprises the site is Arents, loamy, gently undulating.  This unit is made up of areas that have been mined for gravel and sand.  The areas are lower than the surrounding landscape.  Slopes range from 1 to 5 percent.  Arents are used as pasture and for urban uses, including light industry, racetracks, golf driving ranges, sanitary landfills, and residential area.

A habitat assessment was performed at the Vilbig Lake site.  Flora and fauna were identified to species when possible.  Habitats such as open water, shoreline, emergent wetlands, riparian forest, and mixed open land were identified.  Conditions at the site were generally conducive to high productivity and species diversity.  A variety of wildlife was observed throughout the site.  Tables 1 and 2 provide a comprehensive list of the flora and fauna identified.  No threatened and/or endangered species were identified on the site.  However, this does not imply that none exist or visit the site

FLORA IDENTIFIED ON THE SITE

FAUNA IDENTIFIED ON THE SITE 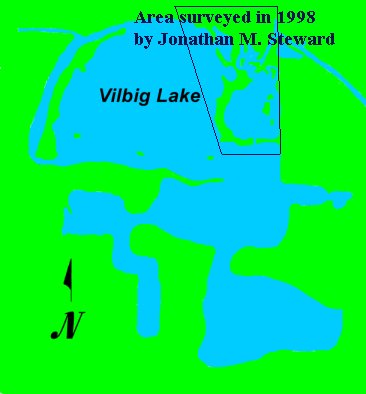 FLORA IDENTIFIED BY THE RESIDENTS OF LAKE VILBIG

FAUNA IDENTIFIED BY THE RESIDENTS OF LAKE VILBIG

All the fish listed below have been identified in the Lake Vilbig fish surveys or reported by areas anglers or reported in lake records page.