It was a pleasure meeting up with you and the other Vilbig faithful for your Pentad Survey.

I  continue to be intrigued with Lake Vilbig. The water has a wonderful sparkling look to it, with no biological sign that it’s anything less than healthy. The fish look healthy and clean and you have species of creatures that couldn’t survive if the lake’s water wasn’t consistently healthy.

Attached is an Excel Spreadsheet document of all the bass which were weighed and measured, so you can pick which types of graphs to choose for your membership. I would definitely look at two graphs…an x-y graph of lengths compared to weights and a bar graph of lengths.

What you will see is a lake still overcrowded with intermediate size bass. The fish population looks predictable and without consistent culling, you will continue to keep getting what you have been getting. My point is this…until you guys harvest more bass, expect their sizes to be pretty much as they are, with one caveat. I do think you guys are destined to produce some double-digit bass at some point. With the big numbers of medium-sized bass, gizzard shad in the 12” size class and tens of thousands of threadfins, your biggest bass of Florida genetic heritage stand a reasonable chance to push well into double digits.

But, before further discussion…Here’s a table of data of fish collected.

Bluegill numbers appear low, except is a few regions of the lake where it appears people are doing something to attract and keep them there. I saw a couple of spots where brush has been added under or around docks and where a few people are feeding the fish.

Since largemouth bass are the target species of most concern, we must keep in mind what it takes to grow them to respectable sizes. Habitat is always the first issue. As goes the habitat, so goes what lives in it. Habitat for intermediate size bass is excellent. Those fish need areas where they can travel in schools, looking for baitfish and feeding. Larger bass love to be near points, next to underwater structure such as logs or big rocks, awaiting their prey to swim by so they can ambush it. The second thing bass need is food. Keep in mind that bass, during the different stages of their lives, have different food requirements. Small bass compete with the forage fish of larger bass. Small bass feed on insects and tiny fish. Intermediate size bass eat small fish, anything that will fit into their mouths. Also understand that when bass are small, they are there in larger numbers, until some of their masses are eaten. Intermediate size bass, say in the 10-14” size class, are feeding mostly on small bluegill, crawfish, smaller bass and shad when they can catch them. But, not much can feed on the 10-14” bass. When you look at your charts and the numbers of bass in that size range, you will see Vilbig bass are average or slightly underweight for their length. Compare that fact with the ratios of forage fish that feed that size class of bass. The most obvious thing is virtually no small bluegill. That’s a sure sign that the lake is overcrowded with intermediate size bass. What about the threadfin shad? Good question. In my opinion, bass must reach their third or fourth year before the ‘figure out’ how to catch threadfin shad and eat them. That’s bass in the two to four pound size class. It looks like the threadfins have made a comeback over the last couple of years and should have a positive impact on your fishery in 2010. I know you guys have paid close attention to the food chain over the years, stocking fingerling bluegill and adult crawfish. While that’s helpful, your best long term answer is to cull bass. The third key ingredient to successfully growing largemouth bass is genetics. Over the years, you guys have taken care of that issue by introducing Florida strain largemouth bass. Since you have those genetics, the only recommendation I might make is to add a few more Florida fingerlings every four or five years to add new bulls to the herd, so to speak. Finally, the last, and often most important, ingredient to growing great bass is to have a harvest plan in place. Besides food chain, inadequate harvest is the biggest inhibitor to bass growth that I see. Keep this in mind…every day a bass doesn’t have adequate food due to heavy competition (or whatever reason), that’s a day of growth lost, never to be regained. As bass age and their genetic potential isn’t realized, you see it at the end of their lives. If a bass has everything it needs to grow and has the propensity to grow large, it will. If it misses too many meals, it will never grow beyond 7 or 8 pounds. That’s a big reason we focus (and harp) on proper harvest.

There are definitely plenty of good areas for bass and bluegill to spawn. Good substrates of sand and gravel areas for spawning. I also like the maiden cane or waterwillow mats around the lake…those islands of aquatic growth are healthy areas for young fish to grow, given the chance. Those areas are also havens for some of the predators, especially gar.

If you want to improve the bass population, you will need to continue adjusting dynamics of the bass with their food chain. Here are my recommendations.

1)      Harvest all bass smaller than 14”. The lake needs this. It isn’t easy, I know, but you need to do it to get the bass population to perform as you wish it to.

2)      I think it’s still a good idea to stock a few known Florida bass fingerlings from time to time. I normally recommend stocking about 1,000 every other year, but if you want to do it every 3rd or 4th year from now on, that would be good. You have established Florida strains now and adding a few every three or four years will work just fine. They typically cost around $1.25 nowadays, available late May, early June.

3)      Keep good catch records as you harvest bass. You guys are pretty good at that. Weighing and measuring bass helps you make good decisions. Just add to the Excel spreadsheet you have and look at the numbers in three month increments to see the differences in growth.

4)      Stock coppernose bluegill if you wish. I don’t necessarily think the lake “needs” these fish, but re-enforcing your gene pool with coppernose is a good thing. Stock adults, a least 4 ½ inches long. Coppernose bluegill stocking in the past has been beneficial, but now bluegill numbers are unacceptably low.

5)      Here’s another optional recommendation. Some property owners may wish to feed the fish from their docks. I can see, from our electrofishing survey, where that is helping. The downside to feeding is that other species, especially carp, tend to come in and compete for feed intended for bluegill.

The biggest changes I see from 2005 and 2010 are the threadfin shad. It appears your bass are either static or slightly declining in overall size…a reflection of the lake’s ability to grow lots of bass and the community’s willingness to protect fish. If you guys harvest 2-3,000 bass yearly, you’ll see a big difference in growth rates and the dynamics of your fishery.

As you read this report, I expect you to have questions, or wish clarifications. Please don’t hesitate to drop an email and I’ll be glad to address those concerns.

Many thanks for the opportunity to serve. 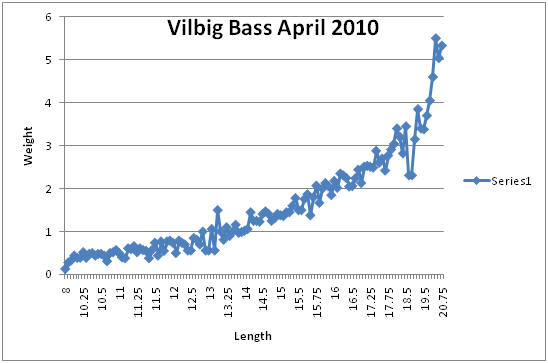 Observations From Club Members at the survey

* Bob was very excited on the threadfin shad populations
* Gizzard shad are named because they do have gizzards.
* Gizzard shad were trying to spawn in the green slime moss.
* Bob liked the age diversification of our bass, seeing a lot of really small to juvenile to adult bigger bass.
* A lot of the beat up looking 2 to 4 pound bass were just through spawning, working on recovery.
* He was disappointed, I was too, of the lack of perch, bream.
* ALL of the bigger bass were around good cover i.e. brush or grass .
* One carp was estimated carrying 500,000 plus eggs.
* Catfish were also heavy with eggs.
* A Florida strain influence is seen in our bass through markings, and body structure.
* Threadfin shad hold in big pods or groups, gizzards are scattered and often solo or small numbers.
* Crappie numbers down due to possible deeper water retreats, after spawning.
* Catfish get pale in color after being out of water for some time due to Oxygen not being in their blood.
* Boat was awesome.

* The Survey date was April 10, 2010.  The Survey time was 12:30 pm to 2:45 pm
* About 90% of the Lake Vilbig shoreline was shocked. The Rusdell Channel, The Food Lion Cove, and a few small Island were not shocked.
* There were so many bass shocked that not all of them were weighed and measured. A lot of the big bass were just out of reach of the dip nets.
* Our boat ramp was not big enough for Bob's research boat.  He had to launch off the bank.
* The VBC had a tournament that morning and included their fish in the Lake Survey.  Members participating in both the tournament and survey had very low batteries by the end of the day.
* The elusive Vilbig alligator was not seen or observed.
* Al Kohutek and Jon Griffin collected enough carp to fill a 55 gallon trash can.
* Bob's boat was able to accommodate 6 club members with room to spare.  Helpers from the club were: Tom Root, David Bonnette, Marty Tackett, Paul Pool, Tim Casbeer, & Brandon Wooddell.
* This was a joint effort by the ILA and the Vilbig Bass Club. Funding and participation was equally divided. Big thanks to Tom Root (VBC President), Greg Hoffmann (ILA President) and the ILA board, and all the contributors.
* Lake Conditions: Partly cloudy skies.  There was not much of a moon the night before. The barometric pressure was on a rise from 30.11 to 30.17. The winds were 16-19 mph out of the SSE with gust up to 23 mph.  The air temp was 70 to 72.   The water temp was a 64 - 67.  The lake was at normal level.  The water was murky.  Conductivity: 740 us or umhos/cm    pH:  8.4 standard units    Secchi disk: 0.77 meters    Dissolved oxygen: 9.8 mg/l
* Everyone had a wonderful time participating in the survey.  Bob is highly recommended by the Vilbig Bass Club.